Wests Tigers have lived up to their tag as Round 1 specialists after securing a comfortable 20-6 victory over Manly at Leichhardt Oval in wet conditions in Sydney last night.

In front of a partisan crowd of 13,159 the Tigers overpowered Manly in the second half, after trailing the Sea Eagles 2-0 at half time.

It makes it 5 years in a row the Wests Tigers have emerged as Round 1 victors.

It marked Michael Maguire’s first game in charge of the Club with a victory, as the two veterans Robbie Farah and Benji Marshall, alongside Luke Brooks, controlled the second half with an outstanding short and long kick display off the back of a powerful performance from the Tigers forwards, who dominated field possession and the collisions in the second half, to blow away the Sea Eagles who had enjoyed the better of the first half.

In truth, the first half was a fairly forgettable affair after rain lashed the ground just five minutes before kick-off, sending the diehard fans on the hill scurrying for their umbrellas and ponchos.

Whilst the Tigers dominated early field possession, they were guilty of trying to push the pass and play dry weather football as a number of sweeping backline movements amounted to nothing.

Luck was on the side of the home side when Manly were denied a try to Curtis Sironen due to referee interference on Corey Thompson, while the Sea Eagles bombed a certain try a few minutes later when fullback Brendon Elliott inexplicably dummied when he had a winger open who would have walked in for the opening try.

The only points of the first half came courtesy of a Daly Cherry-Evans penalty goal, as both sides defended well in the first half, but were guilty of making some errors in at times atrocious conditions.

Whatever Coach Michael Maguire said to his troops at half time had the desired effect, as the Wests Tigers adapted a much more power based, direct game plan in the second half, which resulted in getting a great roll on down the middle, quick play the balls, and a number of outstanding short kicks from the playmakers.

Esan Marsters levelled the scores early in the second half through a penalty goal, before veteran hooker Robbie Farah, who was playing just his third match at his spiritual home after leaving the Club in sour circumstances in 2016, scored the opening try courtesy of a ricochet grubber kick.

The Tigers were now well on top of Manly with bench forward Josh Aloiai having one of his best games for the Club, running over 130 metres from 14 carries.

The playmakers, after a sketchy first half, really took control in good field possession in the second half forcing six drop outs.

Robbie Farah forced three himself, including a line break, one line break assist, and getting through 44 tackles as he continues to prove his guile and class at the age of 35.

The second try came through a constant barrage of pressure and disciplined football and repeat sets, as Luke Garner crashed through the tackle of Daly Cherry-Evans before breaking through and running 20 metres to score under the posts, to ensure huge celebrations from the whole side behind the in goal area.

By now the Tigers were in total control and it was no surprise when they extended their lead to 20-2 when Farah took advantage of a quick play the ball from Ben Matulino to start out of dummy half and dummy and go, slamming the ball down to put an exclamation point on the victory.

Michael Maguire’s decision to go with four forwards on the bench paid dividends with some outstanding individual performances.

Alex Twal also got through a power of work in the second half having a great battle in not taking a backward step with Martin Tapau.

A couple of the Wests Tigers’ debutants had outstanding games, with Ryan Matterson running for over 160 metres from 17 carries, whilst bench forward Thomas Mikaele made a strong impact in just 29 minutes, running for over 100 metres, demonstrating to everyone exactly why he was elevated to Round 1 selection.

The sides defence was generally excellent throughout, and it was a shame when Manly scored a great try as the final siren sounded, with the ball going through a number of hands to make the final score 20-6.

Whilst some of the Tigers’ attack was clunky, and the outside backs had quiet games in general conditions were difficult to shine out side.

Corey Thompson once again did a great job at the back, always in the right place at the right time and in position to save a a couple of tries.

Mahe Fonua responded from a couple of errors in the first half to run really strongly in the second half and start the side’s sets off well.

Benji Marshall, who captained the club in the absence of injured fullback Moses Mbye, had one try assist and grew into the game in the second half, whilst Russell Packer had good impact off the bench in the second half.

Des Hasler would have been disappointed with the visitors’ second half as they had no answer to the Tigers’ power game, with some of their key playmakers having very little field possession to work with.

The Wests Tigers will be satisfied with a grinding type victory, however will face a stiffer task next week as we take on a Warriors’ side that obliterated the Bulldogs 40-6 in Auckland on Saturday.

The Warriors beat the Wests Tigers comprehensively in a trial game two weeks ago 26-16, and the boys will have to face a more physical and threatening side across the park than the Sea Eagles were yesterday.

The Tigers now have an 8-day turn around, before a Sunday 6pm kickoff at Campbelltown against New Zealand next weekend.

A large crowd will be expected at Campbelltown given both sides are coming off Round 1 wins, and the later kickoff time should avoid any potential heat.

Hopefully we see a big crowd out there to support the boys after a big Round 1 win!!!

Well, it wasn’t the end to the season we wanted, the Wests Tigers going out of NRL finals contention with a heavy loss to the Sharks at a packed Leichhardt Oval. On this edition of […]

With a new year, a fresh new season of NRL will shortly be upon us with teams training with one eye focused on trials at the end of February. Although this particular off-season in terms […]

The Wests Tigers will play the Cronulla Sharks this weekend at Leichhardt Oval and the math is pretty simple – win and you play semi-final football. On this week’s edition of the Wests Tigers Podcast […] 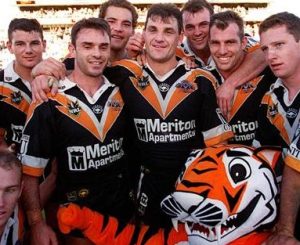