With a new year, a fresh new season of NRL will shortly be upon us with teams training with one eye focused on trials at the end of February.

Although this particular off-season in terms of recruitment and retention has been a bit disappointing one for Wests Tigers fans, which is really saying something when you consider the Cleary drama from 2018, I think that fans will be pleasantly surprised at the strength of the team.

There’s a good combination of a big and aggressive forwards, the halves combination of both Brooks and Marshall, as well as some young and exciting backline prospects all under the guidance of premiership-winning coach Michael Maguire.

With all that said, here is my 2020 Wests Tigers predicted line up:

I know Wests Tigers fans will be disappointed that the name Latrell Mitchell has not made its way onto this list and believe me, so am I but you will find no other player in the NRL that plays with such passion, determination, and pride than Corey Thompson.

Having been signed by the club in 2018 as a depth winger, Thompson has quickly become the club’s best choice at the fullback position with his ability to make metres up the middle as well as his knack for beating defenders to score under the post.

This man, in my opinion, has become one of the most underrated wingers in the enter competition. Nofoaluma’s kick returns, as well as his yardage game, is one of the best in the NRL with the Samoan Winger averaging 155.1 metres a game from 14 appearances.

The most impressive part of this stat is that Nofoaluma makes the majority of his metres from dirty hit-ups at the beginning of sets. 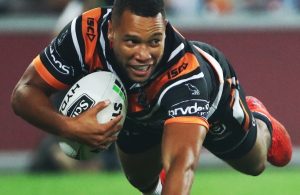 Being a jack of all trades type of player has meant that Moses Mybe has not nailed down a position so far in his NRL career. However, this might have changed with the Maroons rep impressing fans with his shift to the centres in round 14 against the Cowboys.

Mybe in 2019 was unable to find consistency at the fullback position however his game awareness and speed demonstrated that he has all the attributes to make a world-class centre. Maroons Coach Kevin Walters even trusted Mybe with the huge responsibility of defending Tom Trbojevic in the deciding game of State of Origin 2019.

Casual Wests Tigers fans might not know much about Tommy Talau at the moment but believe me, this will change by the end of the season. Having been labelled as the most talented junior since Tedesco by the King Benji Marshall, Fans should be excited about young Talau.

Having played in the halves coming through the grades at the Bulldogs, Talua has been converted into a Centre by Maguire due to his natural awareness for the game that reminds me of Joseph Manu from the Roosters in regards to how he can beat his opposing centre to find the try line.

The form of Paul Momirovski at the back end of meant that I had to find a place for him in the backline. A very smart player who will no doubt kick goals this season, I’m expecting Momirovski to go to another level in 2020.

Many people will argue that Momirovski is not one of the Tiger’s better options when it comes to the wing position, however, I will remind people of round 21 against the Bulldogs where he ran for 177 metres and scored 16 points all on his own to almost send the game to golden point. 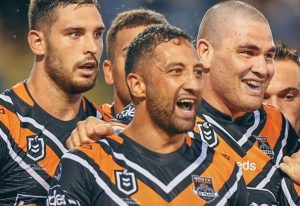 The King himself has signed on for presumably one last season capping off one of the most impactful careers of all time. Benji Marshall at the height of his career was an unstoppable runner of the ball that was able to create attack out of nothing.

An ageing body has limited the Kiwi Captains’ abilities in this regard but it is a real testament to the character of Marshall that he’s been able to turn himself into the floor general of the team taking the pressure off halves partner Luke Brooks.

The form of Benji Marshall this season will play a huge role in regards to the Tigers finals hopes and is my choice as Captain in 2020.

With the departure of Ryan Matterson to the Eels in the offseason, there is no doubt that Luke Brooks is the Tigers best player.

Brook’s ability to play straight at the line is a skill set that sets the Tigers halfback apart from other playmakers in the NRL while he has also managed to find consistency in his kicking game in the last few seasons.

If the Tigers have any intention of breaking their long finals drought, Luke Brooks must take his place as one of the elite playmakers of the competition and with the help of Maguire, I 100% believe that Brooks can achieve this. 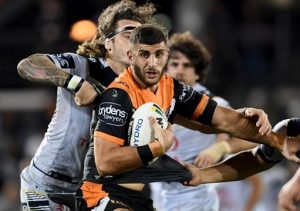 A State of Origin smokey in 2019 before the arrival of Payne Haas, Alex Twal has established himself as an iron man of the competition with his effective defensive work rate in the middle of the field.

A real leader in the forward pack, the form of Twal will be important in regards to replacing the workload left by Matterson in the middle. For Twal to make the next step into being an elite prop, I would love for Twal to improve the metres he makes up the field which will go a long way to allowing the Tigers to play the power game that Madge implemented at Souths.

With the retirement of club legend Robbie Farah, there is no doubt that the Hooker position is a real point of concern for 2020. Although predominantly a halve, it is believed that Billy Walters has been signed as a Hooker for the up and coming season.

Known to be a talented playmaker as well as an impressive defender, Walters has the ability to do a job at Hooker this season and for the Tigers sake, I hope this is the case because if the 2018 season taught Tigers fans anything, it’s that it’s impossible to be considered a top 8 attacking team without an effective number 9.

A breakout season in 2019 saw Josh Aloiai become the clubs most effective middle forward with the props ability to break tackles and make yards up the middle of the field improving out of sight.

If Aloiai can increase the quality and quantity of his minutes in 2020, he will become one of the league’s best enforcers in the same mould as Jared Waerea-Hargreaves.

The combination of Garner and Brooks on the left edge proved to be one of the Tigers most lethal combinations in 2019. Having just resigned for the club till the end of the 2022 season, Garner has the potential to become of the league’s most lethal edge players with his ability in regards to line running is second to none.

I’m tipping Garner to have a big season in 2020 and to one-day Captain the club.

Signed as the replacement of Ryan Matterson from the Dragons, Luciano Leilua has made the move to Concord having had his path to longer minutes in first grade blocked by representative forwards such as Tyson Frizell and Tariq Sims.

The attacking potential of Leilua is practically limitless with his size, strength and athleticism making him a nightmare for opposition defence. The young forward also has amazing skills for a big man which allows him to create for others around him through offloads and his passing game.

To reach his potential, however, Leilua must improve the defensive aspects of his game especially in regards to the one-percenters around the ruck. I have no doubt that an offseason with Madge will address these areas and I am very excited to see Leilua reach his potential in 2020. 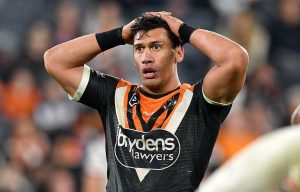 The back end of 2019 saw a resurgence of form for Elijah Taylor to the point where I believe he is the best option within the squad for the number 13 Jumper.

Taylor is solid defensively and can provide playmaking ability at first receiver in block plays which will take pressure off Brooks and Marshall, giving them more time and space.

Taylor is also a leader through his actions on and off the field which will make him an important player in 2020.

Probably the definition of a super-sub, if Reynolds is not stood down by the NRL and can avoid injury, his energy and heart can provide the attack with a different point of attack which most other teams simply don’t have.

Whether this impact is from hooker of five-eighth, Reynolds still has a lot to offer in the NRL and fingers crossed 2020 is the year that Reynolds proves it.

One of the most promising rookie forwards of 2019, I’m expecting Thomas Mikaele to take another huge step forward and wouldn’t be surprised if he retook his starting position from the end of last year.

Mikaele showed a great deal of consistency which is very rare for someone of his age in the prop position. Looking at his stats, If Mikaele had 10 runs then he would run for 100 metres. If he took 16 runs he would have run for 160 metres. 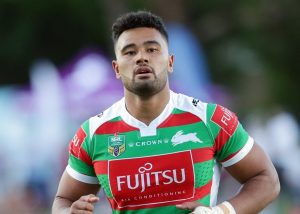 An underrated signing due to his absence from the game, Zane Musgrove left the Rabbitohs as a 20-year-old prop who averaged 100 metres a game in an established forward pack in the 2017 season.

Maguire has shown a lot of faith in Musgrove and hopefully, this faith will pay dividends as the young prop has the potential to make a real difference in the forward pack this season. I’m expecting Musgrove to play a high amount of minutes from the bench in 2020 as he puts pressure on the starting players.

Musgrove is the hard-hitting aggressive forward that players from the opposing team will think twice about running at which is something the Tigers have lacked in recent years.

What can you say about this legend that hasn’t already been said? Michael Chee-Kam literally clinched victory in the last minute not once but twice against both the Broncos and Rabbitohs with his ability to break the line, step the fullback and score a cracking try.

A lighter backrower you can take advantage of tired defences with his footwork, Chee-Kam can also cover the centre position which makes him a valuable utility player from the bench in any team.

All statistics and photos are the property of NRL.com and Wests Tigers.com.au

About Declan McCutcheon 29 Articles
Declan has supported the Wests Tigers since moving to Australia from Scotland in 2007. His football coach took him and his dad to a Tigers game where he got to see Tigers legends such as Benji Marshall and Robbie Farah in action, he's been hooked on the team ever since! Declan is looking forward to Michael Maguire leading the club to premiership glory in the not too distant future.

In another frustrating performance, the Wests Tigers have gone down 16 to 6 against the Canberra Raiders at Campbelltown Stadium. Although the effort was much better this week, a disappointing second half from the team […]

Joel and Eddie are in Tiger Territory for the first time as they record Podcast Six at Wests Ashfield Leagues Club, as the season draws closer, being less than 8 weeks away.  In Part One the […]

The Wests Tigers won plenty of respect in their hard-fought loss to the high-flying Eels last weekend. On this edition of the Wests Tigers Podcast we look back at that game, in particular the impact […]

What Asu Kepaoa can bring to Wests Tigers